Home » Blog » What Are The Main Types Of Tennis Courts?
Blog

What Are The Main Types Of Tennis Courts?

If you’re new at tennis, you may think that you only need one type of shoes for the game. While this may be true if you’re only ever going to play on one tennis court, if you hope to expand your horizons in tennis, you’ll need to realize that there are various types of courts.

With a variety of courts to play on, you’ll need to consider what type of footwear you’ll need. The shoes that you usually wear may not have the traction needed for the court that you’ll be playing on. To help you prepare accordingly, consider the following different types of tennis courts.

Made up of some type of compressed material, whether shale or brick, clay courts are highly attractive yet they also require expensive care and maintenance. Because of this, you won’t always find clay courts in just any tennis facility. When set up outside, clay courts tend to deteriorate faster.

For players, playing on clay can be both satisfying and frustrating. It’s not as high-impact as some other courts and it can help you to get really good at cross court plays. Yet, it can also be slower and more challenging to play on which could mean you end up more physically exhausted from a game on a clay court than you would on another type of court.

Even less common than clay courts, grass courts are visually pleasing and their uniqueness makes them a favorite for homeowners who want to install tennis courts. While you may not be playing that many matches on grass courts, if you get invited to a leisurely game at a friends home, you’ll want to be prepared. It’s the high maintenance that discourages many facilities from using grass on their courts. Although, if you ever get to play at Wimbledon, you can expect to play on grass courts.

For players, it can be fun to play on them as you get to move fast, thanks to the low bounce. While this may mean more of a challenge, it’s certainly one of the best ways for players to improve their skills. If you happen to be really good at serving and volley, you’ll probably like playing on grass courts.

From acrylic hard courts to synthetic hard courts, there is a variety in the type of material used to create them, but one thing remains the same: hard courts are ideal for those who want to play a faster game. You’ll discover that most tennis facilities have hard courts because they require relatively low maintenance.

For the player who loves good bounce, you’ll love a hard court. It also ensures that you’ll be able to transition easier. While many used to avoid hard courts due to the rough impact, most hard courts are deigned with special shock absorption features, so you don’t have to worry about injury. 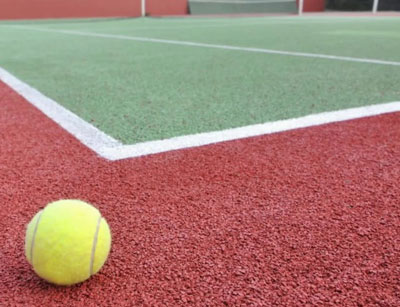 Carpet courts are removable ones and are often found on indoor tennis courts. They are often made from materials like turf or hard rubber. If you are a dedicated tennis player, you may end up playing on carpet courts every now and then, due to bad weather conditions outside.

For players, it can mean a fast court that allows you to transition easily but with low-bouncing balls. It isn’t a surface that you’ll find at professional tournaments but you may find it every now and then in some facilities where tennis is played.

Shoes For The Different Courts

With the variety in tennis courts comes the need for variety in footwear. When looking for shoes for a hard court, you’re going to want to find shoes that offer tough outsoles, as well as a highly durable design.

For clay courts, you’ll need non-marking soles on the shoes that you buy. Also make sure that they have durable sides, so that they don’t rip during your slides. When looking for shoes for grass courts, choose flat outsoles, so you don’t damage the court and ones with a great grip and traction. Grass courts can sometimes be wet, so you want to make sure that you wear shoes that won’t be easy to slip in. For carpet courts, you’ll want to look for a lightweight shoe that is responsive and has a smooth sole. Using ones with too much grip can result in tripping, etc.
You can check out our personal tennis shoe recommendations and see what will suit your most commonly used court.

Now that you better understand the type of tennis courts to be found, you’ll also better understand what type of footwear to invest in. Understanding how each type of tennis court works can also allow you to practice your weak points for those courts. If you know that you’ll largely be playing on a certain type of court, you can make sure to improve your game for that specific type and invest in the proper shoes for it.

What Is Tennis Elbow?

Hi there, I’m Kate Young and I’m a fitness coach from California, but I now live in Austin. I have been involved in so many different sports over the years, including swimming, running, athletics, gymnastics, rugby (yeas, you read that right), baseball, tennis, and so many more that I have lost count.

I just love competing in sports, but struggled to find the one that I would stick with. So, instead I decided to become a fitness coach as it allows me to work with so many different types of athletes.

A lot of my work has involved working up with college tennis teams where I have tailored some endurance type fitness programs. Tennis coaches are great at teaching techniques, but a lot of them struggle with general fitness levels.

And that’s where I come in. On this site I contribute to anything tennis, fitness and diet related, which will help you get to your goals quicker and with more ease. And if you have some very specific questions then why not reach out on one of the social media channels where all of us are very active.