Toughest Triathlon in the World

The Full X is considered to be the hardest triathlon in the world for many reasons.

With 140 miles to travel, you’d think that would be enough of a challenge in itself. However, this 140-mile trek includes 17,000 feet worth of climbing.

The entire course is packed with tricky terrain, mountains, and water. It takes a toll on the body more than any other triathlon that exists.

So, this triathlon has enough to put most people off. However, that’s exactly what appeals the most to some triathletes. A standard triathlon is a huge challenge. But the Full X takes things to new heights that transform it into an extreme race.

Are you interested to learn more about what the Full X involves that makes it the hardest triathlon on Earth?

If so, take a look below!

The Full X begins with the swimming section at an extremely early time – 4:30am to be exact.

There are two laps involved with the swim and there are just two buoys to lookout for to keep yourself on track. This lap system often causes the fastest athletes to be swimming against people who are in the process of trying to catch up.

The swimming section usually takes up the first 4km of the race. Therefore, many athletes steady themselves as they can save energy and make up time later on in the race. Another important thing to get right for the race is getting a triathlon wetsuit with the right thickness. 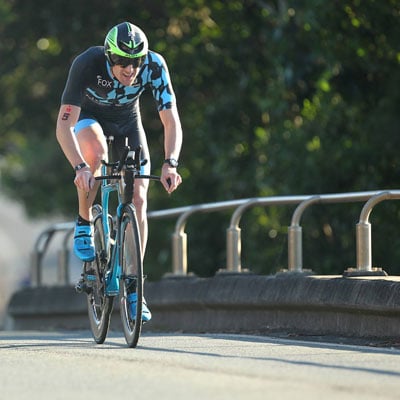 After the swim, the biking and running are the next challenged to face.

Many people enter the Full X with the goal of simply finishing, let alone trying to place well. It’s common for competitors to run into the initial climb with too much speed, and this is where the struggle kicks in.

Therefore, racers typically try to set a nice pace for the middle portion of the race too. You’re better off taking your time to overtake people, rather than doing short bursts of acceleration. This way, the struggle won’t hit you as hard or as quickly.

The course is packed full of a huge variety of roads and terrain. You’ll encounter steeps climbs and downhills, as well as complete flats and rocky surfaces. The track is constantly taking you from a main road to a country trail and even forests.

Athletes try to soak in as much of the scenery as possible, as it’s fantastic. But, as you can imagine, that’s pretty hard to do while running the toughest triathlon in the world.

The most difficult climb in the entire race s the Hardknott pass. In fact, it’s considered to be among the 10 hardest places to climb in the world. It stretches over a few miles, but with a gradient of over 30%, it takes a lot of effort to climb it – especially when you’re in a race.

After you overcome this uphill biking section, there’s around 18 miles of cycling left to go. So, there’s no time to rest at the top.

A lot of the main roads along this course are just about wide enough for a single car. As a result, it’s common to have to move right over and be ready to get back into the rhythm afterwards.

Once the biking portion is completed, you have 26 miles of running remaining. This include running through mountains, as well as up and down hilly terrain.

There are various checkpoints that are placed all throughout the mountain-run section. When you reach each checkpoint, you have to submit your race number. This gives the marshals a chance to keep a track on how you’re feeling – as well as to ensure you’re on the right track.

Once you’re on the last legs of the race, your body is begging your mind for it to be over. At this point, it’s sheer willpower that will carry you to the finish line.

One great thing about the Full X Triathlon is that there’s a great comradery between all the racers. You’ll notice they often encourage each other and they’re all in it together.

If you manage to complete this race, you’re within an elite group of athletes. Regardless of your placing, the Full X causes many races to bow out before finishing. It’s a gigantic challenge.

Having said that, if you’re able to overcome it, you’ll find most other fitness challenges to be easier in comparison.

How Trail Running Can Help a Triathlete