How Trail Running Can Help a Triathlete

However, running on trails can have a major positive impact on your running portion of a triathlon.

We’re about to take a closer look at the beneficial links between trail running and triathlons below.

If your primary source of running practice is done on the road, you may end up hindering your abilities more than you know.

Your joints and feet are given a break from the constant pounding on solid ground.

Furthermore, the different trails and overall environment provides more of a mental stimulus. When you start out trail running, you will be noticeably slower.

But over some time and practice, you will start to improve your speeds.

Trail runs tend to involve more hills and tricky terrain, which is great! When you adapt to the more challenging way or running, doing it on the road will be a breeze.

In addition to that benefit, it’s also a mental change. For athletes, this can be a huge spark of motivation. It presents a bigger challenge to overcome, which means you’ll be actively trying to improve your running abilities more.

It’s a good idea to find out where the best areas for trail running are located. So, spend a little time beforehand searching for suitable areas near you.

You don’t necessarily need a designated trail run system to run on either. Simple parklands can be just as effective for you.

Use online maps to find the locations near you that are full of greenery. Many people are surprised when they find a trail running system close by. Therefore, it’s worth doing some quick research to discover the best places. 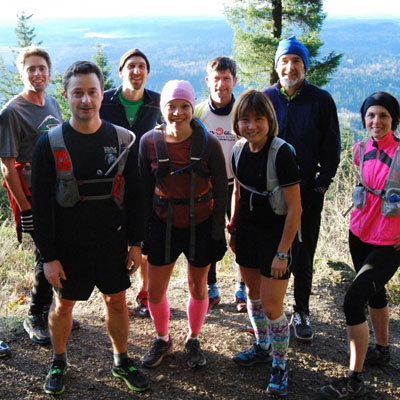 This can be especially helpful if you’re completely new to trail running. Having a group of people to go out with runs on will boost your confidence in no time.

Moreover, you can learn tips from the more seasoned trail runners. Getting involved in a trail running group could be just what you need to open yourself up to a whole new world of running.

The quicker you develop as a trail runner, the quicker you’ll be able to improve your overall running for the triathlon.

You may now be wondering how trail running can fit into your training plan.

Most triathletes set up a solid plan that they stick to in order to practice swimming, biking, and running. How does trail running squeeze in?

Those of you doing trail running for the first time should use the less intense runs for exploring trail running. This gives you the chance to familiarize yourself with the new running environment.

Don’t worry if you don’t get accustomed to it right away. It usually takes a little time to climatize to trails compared to running on flat road surfaces.

You may not know it yet, but once you partake in trail running, you won’t be able to get enough of it.

However, we recommend holding off on taking part in any trail races. Instead, utilize the trail running as part of your training plan for the triathlon.

But afterwards, go ahead and join a trails race.

Using trail running to prepare for triathlons gives people the opportunity to broaden their spectrum of activities. It also means that you can be a part of triathlon and trail running races.

Those are some great achievements.

If you’re implementing trail running into your routine for the first time, you will find it to be an incredibly refreshing experience.

Trail running gives you the ability to overcome a new challenge, which is vital for improving yourself as an athlete.

A lot of trail runners aren’t so keen on using trail running as they aren’t aware of how much it can benefit them. The physical benefits include a new running style that’s tougher. As a result, your body will be working harder to adapt.

There are also excellent mental benefits – which is a key element to master for triathletes. You’re using a completely new form of running, which gives you something new to focus on and improve at.

Try out trail running for yourself and you’ll see how great it can be at improving the effectiveness of your triathlon training. One thing we would recommend for trail running is a running belt as you will likely not come across as many water stops to stay hydrated.

How to Improve Your Triathlon Running Pace

Toughest Triathlon in the World