As a youth basketball coach my biggest worry is seeing kids getting injured. Basketball is such a physically challenging sport, and it puts huge amount of pressure of many parts of the body.

However, the most common injuries encountered in both amateur and professional basketball are ones affecting the ankles.

Many a basketball player has faced dealing with ankle injuries at some point in their lives and it’s not fun. It can seriously impact a professional career and there have been quite a few high profile players who have to be sidelined for quite a lengthy time.
In many of these instances, these basketball players were injured during games and never told anyone about it. This is often why they ended up with more serious problems and why you should always believe your doctor when they say it’s important to get some rest.

Check out the following list of famous basketball players who have had to deal with ankle injuries in their careers. Maybe you have something in common with them or you can take a page from their stories and avoid further injuries.

He’s seen plenty of problems with his ankles and has a history of ankle injuries. He hasn’t let them stop him thus far but he should definitely exercise caution when playing with an ankle as weakened as his is.

He was fouled in a game this year against the Spurs and had his ankle turned. In fact, it’s the fourth time in this season that his ankle has been sprained, making many people cringe with fear.

Since the beginning of his major league career, Stephen has dealt with problems with his ankles, but as long as he is still overcoming them, his fans are happy to see him on the basketball court.

Last year, Gordon dealt with a severely injured ankle during his first game with the Celtics. He snapped his ankle due to a bad landing from trying to get a pass. Landings are often where basketball players hurt their ankles and Hayward definitely didn’t feel great after injuring his ankle in such an intense manner.

Paul George certainly had one of the most painful injuries when he was practicing for Team USA in 2014. He was trying to block another player but ended up getting severely injured. Accidentally pushed into the pole, his ankle bent at 90-degree angle and snapped. He had to miss his upcoming season and deal with his broken bones. Fortunately, he didn’t let this injury stop him from playing his beloved game. 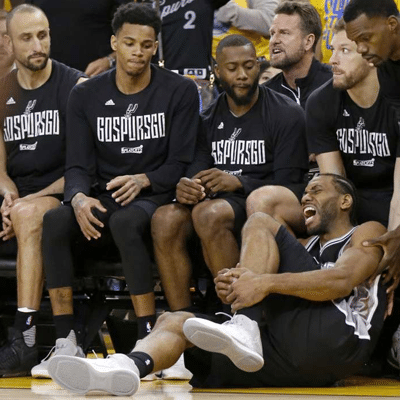 Leonard faced a bad ankle sprain last year and had to miss a game in the finals. Fortunately his ankle sprain wasn’t serious enough to keep him out of basketball or wreck his career like some other basketball injuries have done to NBA players throughout the sport’s history. An ankle sprain is welcome when it is minor. Major injuries are not.

Often when a player gets their ankles hurt during a game, they’ll stop playing that game. But, in 2000, Cleaves showed that he was a fighter who wasn’t going to let a sprained ankle stop him. He was injured early on in a game but returned later on with a whole bunch of tape and a whole lot of desire to win the game.

Bryant fans know that Kobe hurt himself in game 2 of the Finals back in 2000. They know this because Kobe had to miss the 3rd game, which his fans certainly didn’t like. Luckily for him and his fans, he made it back in time to play the fourth game.

It’s one thing to injure one of your ankles in sports. It’s another to injure both of them. Joel Berry had both his ankles feeling weak back in 2017, but he was still in it to win it when his team defeated Gonzaga in a NCAA game.

Ankle Injuries Can Be Overcome

Whether you’re a professional basketball player or not, it can be daunting to get injured. Ankle injuries are highly common for basketball players and are also difficult to avoid. The good news is that players can return from them to full performance.

The same can’t be said about other kinds of injuries, so many players would always prefer an injured ankle over a broken knee or neck sprain.

Either way, taking time to recover and get treated is important. For professional players, it can be a challenge to take time off, as they want to keep on playing their games and enjoy the season. Yet, injured players should consider the bigger picture of their careers.

If they want to keep on playing, they should listen to when their doctor prescribes ankle braces (find some recommendations here: strivechallenge.com/best-basketball-ankle-braces) or bed rest. This can make a difference in players playing for years or ending their career due to poor judgement on their injury and recovery time.

Also, always make sure that your basketball sneakers have the right ankle support. It’s all too common for this to be a major issue.

Take your time to get better and you’ll be able to play for years to come!

What Are The Most Common Types Of Ankle Injuries?

My name is Michael Smith and I met both Sandra and Dave as clients. I’ve been working as a physiotherapist for the past 10 years now, which is a job I love doing.

See, I once had a promising football career which started with the Texas Longhorns, but unfortunately was cut short after just 1 semester when I suffered quite a serious knee injury.

I spent about 18 months going through 3 surgeries and endless hours of physiotherapy. Unfortunately, it was the end of my pro football career, but it opened my eyes to remaining involved in sports and helping athletes recover.

My main focus is sports injuries and I’m set up as a private practice. Maybe one day I’ll try and become involved in a college or pro football team, but at the moment I enjoy the freedom and flexibility of being my own boss.

In my spare time I still coach football, but unfortunately, I cannot play anymore. The nature of my injury was quite severe and has significantly weakened my knee, so I just can’t take such risks anymore.

But coaching kids and teenagers, and helping them prepare for college try-outs is something I absolutely love doing. And reaching a wider audience with some tips on preventing sports injuries is what I hope to achieve on this site.