The Most Common Triathlon Distances

Triathlons tend to involve four distances. However, there are often differences in these distances across all the triathlon competitions that are held around the world.

One of the main reasons for these differences comes down to the group hosting the event. Nowadays, races have to be safe, meaning that the people in charge must adapt the race length to their location.

Having said that, there are some common distances that you’ll find to be similar for most triathlons. And that’s what we’re taking a closer look at on this page.

The international-distance triathlon was established at the very first triathlon race to be in the World Championships.

The distances in this race involved a swim of 1.5km, followed by a bike ride of 40km, and finally, a 10km run. These distances were set as the standard back in the 1980s.

But those same distances are still considered to be triathlon distances by today’s standards too. 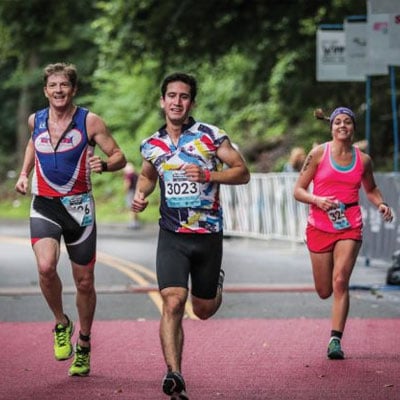 Sprint triathlons are a shorter version of Olympic triathlons. Therefore, they are regarded as a great way for people who are new to triathlons to get into the sport.

It includes around 500 meters of swimming, 15 miles of bike riding, and around three miles of running to finish the race.

So, someone who is completely new to triathlons and interested in completing the longer length ones would find a sprint distance to be the best. It doesn’t require as much intense training and gets you into the triathlons world.

A sprint triathlon is a great way to prepare yourself for the bigger ones. They give you an idea of your fitness levels and the areas you need to improve on during training.

Hawaii in 1978 is where and when the very first Ironman distance triathlon took place. John Collins was the person to create it. This race is considered to be one of the biggest and toughest triathlons for triathletes to take part in.

The distances set during the late 1970s have remained the same in Ironman triathlons of today. It involves a swim of 2.4 miles, a 112-mile cycle, and it ends with a run that’s 26.2 miles long.

You’ll only find the term Ironman used in triathlons that are held by the World Triathlon Corporation. This is because it is a trademark. 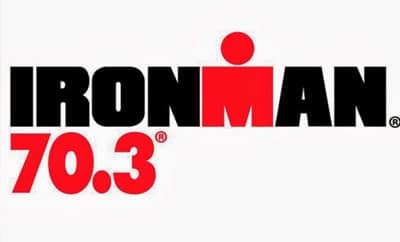 Clearly, a full Ironman triathlon is incredibly challenging. Only the fittest triathletes are able to complete it.

If you were looking for something slightly more manageable, but a little more challenging than the sprint triathlon, a Half-Ironman may be of interest to you.

So, those distances are more manageable, without being too easy. This can be a great way to boost your stamina and find out how fit you really are.

The total distance comes to 70.3, which is what the World Triathlon Corporation refers to Half-Triathlons as. 70.3 is another trademarked name.

Triathlons for All Fitness Levels

The above triathlon races account for the most common distances that triathletes complete. However, there are other triathlons that stray away a little from the traditional distances.

They are specially created to make a triathlon more realistic for people of all fitness levels to complete.

A common one is known as an aquathlon. It leaves out the running part and focuses on swimming and running.

You may also be interested in a duathlon. These races start with a run and end with a run, with some cycling in between.

Nowadays, you can find triathlons that involve off-road cycling and even skiing. Triathlons have developed over the years to ensure that they’re more accessible to different age ranges and fitness levels.

However, the old school distances are still available for the triathletes who dedicate a lot of their time to training. 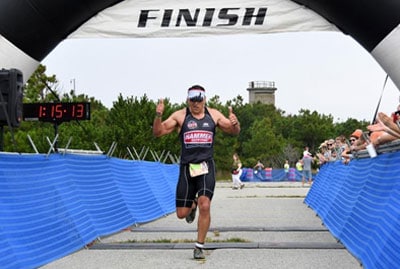 Now that you know more about the different triathlon distances that people take part in, you may be interested to train for the one that takes your fancy.

This will depend on your fitness levels and how determined you are to finish one of these races. There is some gear that will help, and investing in a proper racing bicycle is one thing you should definitely consider (check out our dedicated page).

It goes without saying, being able to finish any kind of triathlon, regardless of the distance, is a fantastic achievement.

Will A Better Racquet Make You A Better Tennis Player?